After nearly three weeks of break, Volkswagen Golf Cup returns to the fight during fifth round of the season. This time, the venue hosting an international grid of 25 drivers from 10 different countries will be located in Morawy Automotodrom Brno.

Our southern neighbors’ venue is well-known to drivers competing in 260-horsepower Golf GTI’s equipped with a power-increasing Push – to – Pass system being present in the series calendar from the very beginning. Also this time, the supporters who show up on the tribunes near Brno, will be able to admire cars starting in different series, what will surely bring even more attention. 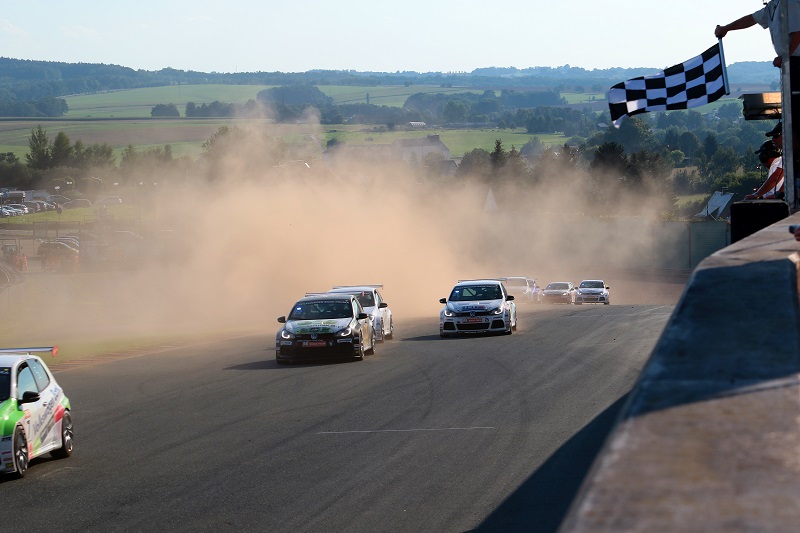 Fifth scene of this year’s struggle

25 drivers representing as many as 10 different countries will come to the circuit located in the heart of Morawy – Automotodrom Brno. Fast and twisty lap is a host for the Cup’s drivers since the beginning of its existence, but a lot of elevations combined with really technical corners are a big challenge for the drivers. Good strategy will be crucial for the final success, because similarly to previous rounds of the Cup organized by Volkswagen Racing Polska, the key to success are: preparations, concentration and a good use of the Push – to – Pass system. The good knowledge of the circuit can be very helpful among least experienced drivers, which can bring us even more exciting battles for priceless points in the overall standings.

The beginning of the fifth racing weekend of 2015 Volkswagen Golf Cup will be very busy. Most of the drivers, admittedly, know the track very well, but it doesn’t mean they can’t prepare to both Sunday races even better.

The racing weekend will be preluded by two test sessions, which are scheduled for Friday, 18th September. They are about to give drivers an extra time to work on their strategies and setup of their cars, including very important tire pressures in the sets provided by the Korean company Hankook. The proper rivalry in the Czech Republic will begin the next day with a first practice session, scheduled for 9:00 a.m. After a traditional half an hour drive, the whole grid will have a time to rest and prepare for the second practice, which will begin at 12:50 p.m. The milestone of the first day in Brno will be a qualifying session, which is about to begin at 3:50 p.m. Half an hour later we will know the starting positions for both Sunday races.

Sunday, 20th September, will be the day of a fierce battle in two races. The first one is due to begin precisely at 10:30 a.m., while drivers will take their starting positions before the second race at 3:10 p.m.

Fans, who come to Brno to admire the whole racing weekend, will also have a chance to see cars from other racing series. The Volkswagen Golf Cup drivers will stand next to such legends as Ferrari 458, Lamborghini Gallardo and Mercedes SLS. The GT racing cars can always guarantee fully filled tribunes.

The thing that will make overtaking easier on the Czech venue, as well as bring more colors to the rivalry during the fifth Volkswagen Golf Cup round is a Push – to – Pass system. It is a solution used in the Golf’s prepared by the Volkswagen Racing Polska since the very beginning of the cup. During this round drivers will have possibility to increase power of the engine with extra 50 hp (up to 310 hp) 19 times during single race. Every time the system will increase the power for 10 seconds, but the next “shot” will be able to use only after the 10 seconds brake. Last season we have seen that the proper usage of the system can be crucial in fighting for the win. At the beginning of the season drivers who used the Push – to – Pass system last year will be in a better position, but during the previous round we have seen that each contestant has learnt very quickly how to make a good use of it. The number displayed on the side wind-shields shows how much shots each driver has left. Activation of the Push – to – Pass system is signalized with a blue lamp placed on the front windscreen of each Golf GTI.

During the fifth round of the Volkswagen Golf Cup drivers will have to face a lot of challenges. Scheduled for Friday two additional test sessions mean competitors will have to spend more time inside the Cup’s Golf GTI prepared by Volkswagen Racing Polska, which will end up with more fatigue and physical effort.

The first references about races in Brno dates back till year 1904, when the race from Wrocław to Wien was held and its route, among others, crossed through Brno. In the 1920s people started to organize mountain races, while the first official race took place in the year 1930. The village routes in the area of Brno established a 29-kilometer lap of the venue. In next years, the masters of the circuit modified it, year by year making the track even shorter, until the year 1987, when the Automotodrom Brno became a circuit in the shape we know it today. The track in Morawy is hosting the most prestigious European and world series like MotoGP, World Superbike, or World Touring Car Championship (WTCC).

Quotes before the 5th round of Volkswagen Golf Cup 2015 in Brno:

Gosia Rdest: - I already can’t wait until the next, second to last round this year of Volkswagen Golf Cup. After a successful outing on Sachsenring I hope to maintain my good momentum. The venue in Brno is well-known to most of the drivers and before entering a proper rivalry we will have two additional test sessions, which is a nice surprise. I am currently sitting on the 7th place in the overall standings and between me and the driver from 5th position is a small difference. Automotodrom Brno is quite similar to the last venue we were racing on behind the wheel of Golfs and I must admit it suits me well. As always, I will do my best!

Jeffrey Kruger: – I am leaving South Africa with a big hunger for racing. We will be on the track on Thursday and I will try to walk the venue that day. On Friday we will have two additional sessions, during which I want to focus on finding good tire pressures and if I have enough time I will try to simulate the qualifying session. I like the circuit, but until now I have only driven there on wet, which can give my rivals a little advantage. My main goal will be to avoid troubles and bring the car safe home. I can’t wait until the next round of Volkswagen Golf Cup.

Simo Muhonen: – During the previous round on Sachsenring my pace was very good, especially in the second race. Unfortunately, due to some important exams in my school I will have to miss the Friday test sessions. Nevertheless, I will still have two practice sessions before the qualifying. Because I have never been on this track before, I prepared myself a lot on the simulator and I think I have done a good job. The top 3 finish in the overall standings is still possible for me, that’s why I will do my best to finish both races in Brno on the podium.

Marcin Jaros: – On the Sachsenring circuit I had a very unlucky weekend, I believe that during forthcoming rivalry in the Czech Republic I will be able to turn the fortune to my side. As most of the grid, I know the venue in Morawy quite well and feel very confident driving around there. The battle is very fierce, that’s why the result in the qualifying will be a key factor. This is the second to last round of this year’s Volkswagen Golf Cup season and I already can’t wait to drive my Golf GTI. Keep your fingers crossed!