Saturday afternoon of 3rd October 3 2015 was an extremely exciting. Fans gathered on Tor Poznań admired how, in the light of the sunset, was elected this year’s champion of the Volkswagen Golf Cup. Until the end everything was possible, but Jeffrey Kruger is too cleaver to making trivial mistakes – second place, behind Dylan Pereira, was more than enough to  gave him the title. 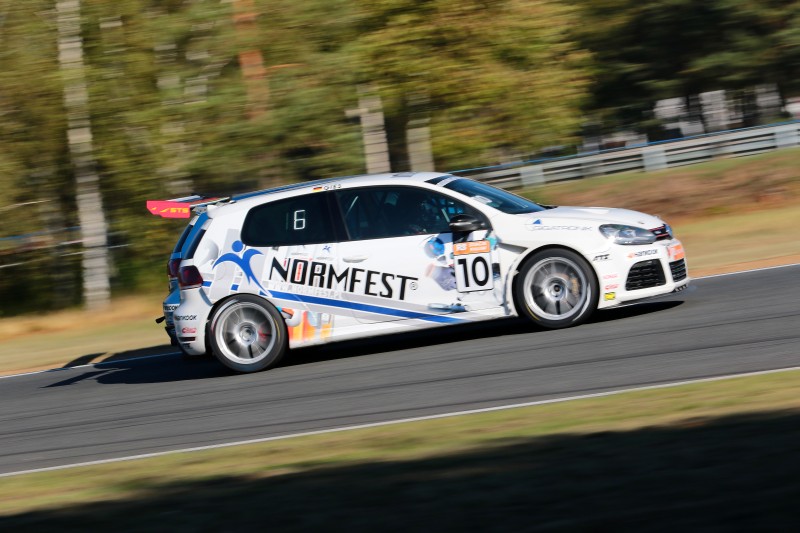 Even before the start it was clear that it won’t be easy for Dylan Pereira to attack the leader of the points classification. To title fell into the hands of Luxembourg, Kruger would have to finish in position in the second ten.

When the lights went out on the main straight Pereira rushed to fight and at each of 14 laps gave it his all. Purple and dark blue Golf, prepared by Volkswagen Racing Polska, crossed finish line with a gap of more than six seconds over the second driver. Unfortunately for Pereira, it turned out to be Jeffrey Kruger, who made no mistake from the first race and without problems remained in the second position. The finish on these positions meant that a driver from South Africa holds the title with 26 points advantage over his nearest rivals.

The top three in the race completed Simo Muhonen, before Marcin Jaros and Andre Giese, who until the very end fought for fourth place and were separated at the finish line by less than a second! Sixth was Marcus Fluch, whom this place was enough to keep the third position in the general classification. The Swede had the easier task, since his main rival, Michał Gadomski did not finish the race due to a collision with Piotr Parys. Seventh place accounted for the only woman in the competition, Gosia Rdest, which has finished in front of Sebastian Arriola, Adam Rzepecki and Bartosz Palusko.

For this year it’s the end of the excitement of the Volkswagen Golf Cup. However, we already know, that the third season will not be the final one – cars will return to the track next year in the new formula, which will raise Polish racing to the next level! 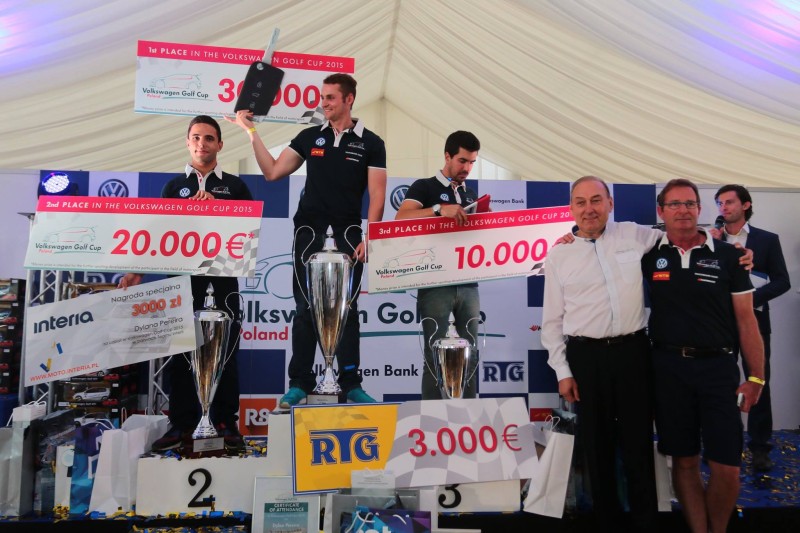 Dylan Pereira: - It was a perfect weekend. I did everything I could trying to chase Jeffrey, but he did not commit any serious mistake and not squandered his points advantage. But I am happy with second place. It was an amazing season in which many times I stood on the top step of the podium, I made a lot of progress and I hope that in future years I will maintain this trend.

Jeffrey Kruger: - It was an amazing season. It started well, but with every race was getting better and better. Good that it happened that way, because in the end I lost a bit of pace, but the points gathered to this moment proved to be sufficient. It was a crazy ride. I hope that next year I will be racing again in some European series. I want to thank the family for their support, the Volkswagen Racing Polska for a great racing series and the new friends whom I met here.

Marcin Jaros: - During the second race, the Volkswagen Golf Cup on Tor Poznań I scoored the best result of the season. Defence of fourth place, however, was not easy, because in the end I had almost no tires and Andre Gies was pushing me hard. Thanks to all of you for your support during this season. Though not always arranged it my way, but overall I am happy and I hope that the next will be even better.

Janusz Gładysz, president Volkswagen Racing Polska: - I am very pleased with the third season of the Volkswagen Golf Cup. Cup organization required a lot of work, but its effects compensate it in 100%. I am glad that our series attracted many drivers who fought in style to the very end. Everything like last year resolved the in the last race, so I hope that the fans were pleased with the show, which we made for them. It is also nice that everyone safely lasted until the end of the season, because racing is an extreme sport and there is a risks associated with it. I would like to thank all the employees of Volkswagen Racing Polska for the hard work at the cup, partners for their support, without which the organization project of this size would not be possible, as well as my family, who always supports me in my passion for motorsport.